The Chicago Cubs starting rotation is leaving Cubs fans skeptical of the year to come. During the off-season, the Cubs lost two of their best pitchers. They traded their ace, Yu Darvish, to the San Diego Padres and lost Jon Lester due to free agency. The Chicago Cubs starting rotation last year was exceptional, but this year there are many questions surrounding this new rotation. The Cubs finished in first place in the NL Central with a 34-26 record in the shortened season. It is fair to say that the Cubs are serious contenders in the NL Central. Let’s take a look at the Cubs’ starting rotation for the 2021 MLB season.

The first starter in the Cubs rotation that will be given the ball on opening day is Kyle Hendricks. Hendricks is currently signed to a 4-year deal worth $55.5 million and will become a free agent in 2024. Hendricks had an impressive 2.88 ERA along with 64 strikeouts in the shortened 2020 MLB season. Hendricks is not considered a pitcher who throws heat. In fact, his sinker and fastball average only just 87 mph. Although he doesn’t throw too hard, his command and control speaks for itself, delivering a 2.5% walk rate. Hendricks has always been a solid pitcher, going 6-5 last season, but with Yu Darvish and veteran Jon Lester gone, he will have some pretty big shoes to fill.

The second starter in the Cubs rotation is Zach Davies. Davies is very similar to Hendricks in a sense because they both focus on command + control over velocity. His ability to hit spots and paint corners is exceptional while only throwing an average fastball of 86 mph. Below is a chart of Davies’s pitch types that further depict his ability to mix up his pitches. 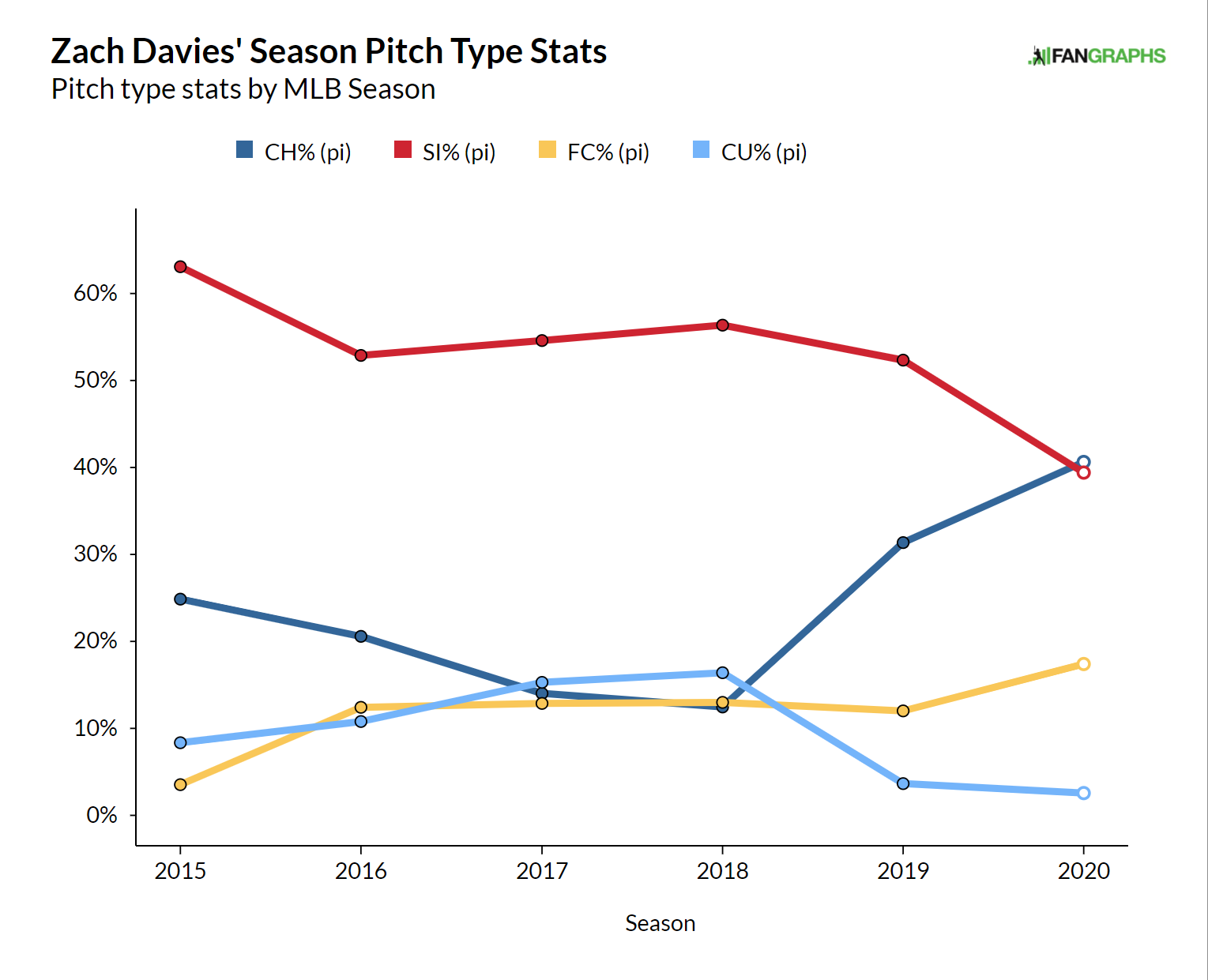 The third starter in the Chicago Cubs rotation is Jake Arrieta. Arrieta finished the 2020 season with a 5.08 ERA, 32 strikeouts in 44.1 innings pitched. After three seasons with the Phillies, Arrieta is back in Chicago and is signed to a one-year contract worth approximately $6 million. In an interview with MLB, Jake Arrieta had this to say;

“The last three years weren’t to my expectations,” Arrieta said Saturday in a Zoom call with reporters. “I had to deal with several physical setbacks. The [left] meniscus [tear] that I pitched through all of 2018 were tough, but I didn’t want to have surgery during the season. And then, in ’19, I ultimately had to have bone spurs taken out of my elbow again. So there were some slight physical limitations, but having said that, I didn’t perform the way I was capable of.

“But I have a lot in the tank, I have a lot to still accomplish in this game, and I’m excited that it’s going to happen in this Cub uniform again.”

Although Arrieta did not have the best couple of seasons since his 2015 CY Young year, he will join Kris Bryant and other familiar faces this season that could change things up for him.

The fourth pitcher in the Chicago Cubs’ starting rotation is Alec Mills. Mills finished the 2020 season with a 4.48 ERA. In the 2021 spring training season, he finished the season with an upsetting 5.40 ERA with only 4 strikeouts. The Tennessee-Martin alum threw the 16th no-hitter in Cubs franchise history on September 13, 2020. Hopefully, he can bring the same intensity of that game and carry it into the 2021 season.

The Chicago Cubs do not have a definitive starting 5th pitcher. There is some speculation that the Cubs will have a sixth-man rotation between Adbert Alzolay and Trevor Williams. The 26-year-old Adbert Alzolay has had his cup of tea in the bigs, throwing only just 3 games with a terrible 10.57 ERA. Alzolay needs more opportunities to prove himself and ultimately earn himself a spot as a 5th man starter. On the other hand, Trevor Williams is signed to a one-year contract worth approximately $2.5 million. He has gone 31-37 with a 4.56 ERA in his MLB career. He finished spring training with a 1.32 ERA in the 4 games he started.

About Michael Balmann 1 Article
I am a current senior at the University of Miami with a love and passion for sports. I am a die hard Mets and Jets fan from Mountainside, New Jersey! I am a sports administration major with a minor in marketing. I am excited to one day work in the sports field with my favorite teams! Knup Solutions & Sports 2.0 has given me the opportunity to immerse myself in a field that has allowed me to express myself as a sports fan.

Mother Nature apparently had enough of the Chicago Cubs losing games at Wrigley Field, and enough rain came down on Tuesday night to postpone the game. That set up a doubleheader on Wednesday against the […]

For our Cubs weekly update, the Chicago Cubs began the second half of the 2021 MLB season on Friday night, and they were in Arizona to take on the Diamondbacks. This was the perfect opponent […]